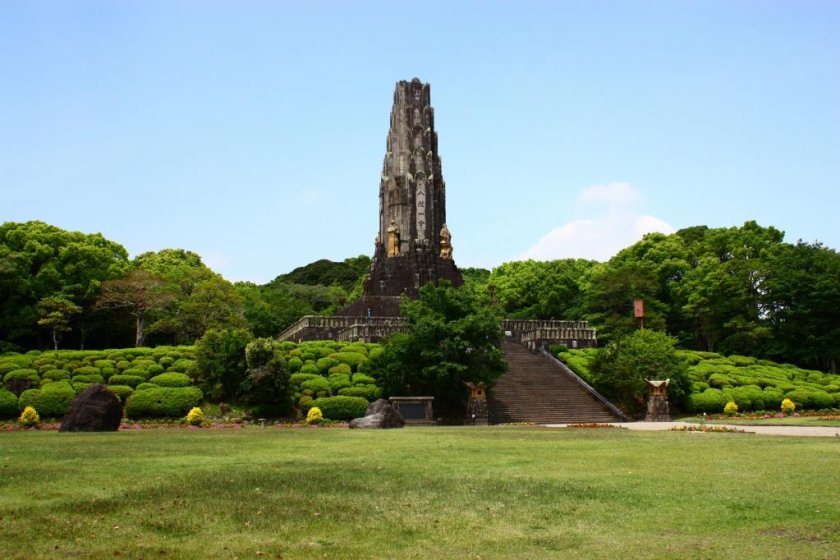 A Stroll around Heiwadai Park

A peaceful oasis in Miyazaki City

This distinctive tower was originally a symbol of Japanese imperialism, but today it represents peace.

It was one of those perfect spring days with hardly a cloud in the sky. My friend and I were exploring Miyazaki City on bicycles we’d borrowed from Guesthouse Heiwa, where we’d spent the previous night. It was my first time in Miyazaki and I didn’t know much about the city, but Shiori-san, the guesthouse owner, had recommended that we visit Heiwadai Park.

We cycled alongside the river for a while, admiring all the greenery – an unexpected (and pleasant) surprise in a Japanese city. Rising from amongst the trees in the distance, we could see a tall stone structure. I idly wondered what it was, but as we got closer I realised that it marked our destination. And that it was at the top of a rather large hill.

Heiwadai Park opened in 1940 in celebration of the 2600th anniversary of Jimmu, Japan’s mythical first emperor. Situated 60 metres above sea level, it offers impressive views of the surrounding area. However, struggling to pedal up the steep winding road under the midday sun, I wasn't really thinking about any of this.

When we eventually reached the park entrance (having given up and pushed our bikes for the final stretch), we were greeted by wide lawns, immaculately kept flower beds, and of course the mysterious stone structure we'd seen earlier.

This turned out to be the Peace Tower, which was constructed from stones gathered from across Asia. Interestingly, when the 37 metre high tower was first built, it was intended as a symbol of Japanese imperialism. It was only after the events of World War II that it became a monument for peace.

Heiwadai Park translates as Peace Tower Park. Fittingly, the atmosphere is indeed very peaceful - right down to the flock of doves circling above us! (We later found a large cage tucked away in the bushes, containing more doves, so perhaps this wasn't such a coincidence after all).

We wandered down a path that led us away from the bright sunshine and colourful flowers, and into the shade of the trees. Here, we had another surprise - we were suddenly greeted by lots of small terracotta statues. During the Kofun period, more than 1500 years ago, clay statues like this were placed on burial mounds.

Today, there are around 400 replicas of these haniwa statues found in Heiwadai Park. There are animals, warriors and dancers. Each one is unique, and it's fun to check out their different expressions.

After we'd finished exploring the park, we stopped for some lunch at Himukamura-no-Takarabako, an organic cafe in the grounds. The delicious and healthy food was the ideal end to our morning ... and set us up nicely for the bike ride back!

I spent three years living in Japan as an Assistant Language Teacher on the JET Programme, not knowing what to expect but with images of Tokyo, geisha and Mount Fuji in my mind. I was placed in Yamagata prefecture in a small rural town that I couldn't find in any guidebook. I learnt to snowboard, climbed mountains, tried my hand at ikebana and kyuudo and koto, dressed up as a samurai, karaoked til the early hours, become obsessed with onsen, and had countless other adventures and experiences. For a relatively small country, Japan has so much to offer, and I love nothing better than exploring - particularly heading off the beaten track and into the beautiful countryside. I set myself a personal challenge to visit each of the 47 prefectures, which gave me a great excuse to do a lot of travelling. Although I've now ticked them all off, there's still so much I want to see. Japan will always be my second home and and I'm looking forward to discovering and learning more for a long time to come. 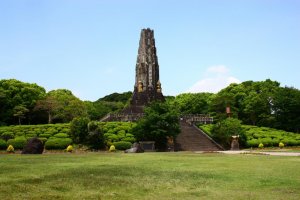 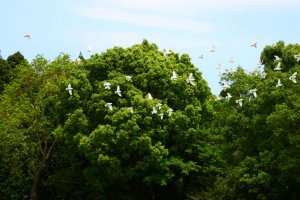 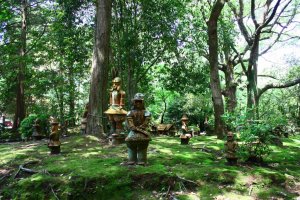 Kim B a year ago
It really does look like a park with a peaceful atmosphere!
Reply Show all 0 replies
1 comment in total